Plug in your big headphones and find your deep focus in everything from Beethoven to the Chemical Brothers.

As a sequel to the power songs of the last Staff Picks series, Flow State is all about the long focus session. This time around, I asked my colleagues: what music helps you get deep into your flow? Maybe you've got a monster of a spreadsheet to update, an article to write, or just need to create some mental space for the next creative project. The songs here are aimed at helping you get into your groove and finish the job.

Of course, everyone's definition of flow is different. My coworker Jonathan Foo, for instance, goes straight to the enduring classics with Beethoven, whereas Maria Vivas finds her flow in Flume's propulsive and chill EDM. If you've been following these Staff Pick playlists closely, you won't be surprised to see Kevin Levesque chose Death Cab for Cutie. And for me? I'll take 20 minutes of Moonface's minimalist marimba and crappy drum machine. See below to read more about why these songs made the list.

"For me, it's the slow build-up throughout the first three minutes of the song. It's engaging enough to keep me focused, while also not being too distracting from what I'm trying to focus on." 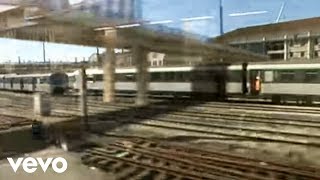 "While this is ideal background music for any deep thinking task, I prefer to use it as a time-out from work so I can actually watch the music video by Michel Gondry. It syncs the song to passing trees, cars, and power lines as seen from outside the window of a moving train. It's an amazing technical feat that was plotted out on graph paper back in 2001, and still holds up next to the digital magic of today."

"The track name, while unconventional, delivers exactly what it promises. Moonface (Spencer Krug of Wolf Parade, Sunset Rubdown, and many more) combines the title's two instruments—marimba and a lo-fi drum machine—to minimalist, dizzying heights. 'I venture into a dreamland / where I am living on the edge,' he sings at the opening, and it's not long before I join him in that space between dream and reality, a space that, for my money, is the definition of being in a deep flow."

"I have to do classical music (and usually entire albums) when focusing on writing/editing something long. But for subconscious problem solving, Sylvan Esso's music never distracts me. I think it's because Amelia Meath's voice melts into the music like another instrument, which means I can choose not to actively listen to the lyrics when I'm doing word-work of my own."

9. Beethoven, Symphony No. 7 in A Major, op. 92: II Allegretto, conducted by Daniel Barenboim

"Hauntingly beautiful composition that focuses the mind and soul."

"Back in the beginning of my software development career, the prototypical put-on-the-headphones-and-code music was Brian Eno's Discreet Music (1975) and/or Harold Budd and Plateaux of Mirror (1980, with Eno). In 1989, Hector Zazou's Geologies was lodged in my CD player for long stretches of time. I recall going to a "listening event" with Zazou at the old ICA on Boylston Street (now a BAC building)—dozens of people sitting in a totally dark room listening to music. Do people do that anymore? In the late '90s and early '00s, post-rock ruled—Mogwai and Explosions in the Sky, etc. These days, for focused coding, I might play Max Richter, Olafur Arnalds, or Jose Gonzalez. When I'm lazy or looking to expand my horizons, there's a Spotify playlist that is conveniently entitled 'Music for thinking, writing, coding, focus.' There are too many great artists to mention. However, if I ultimately have to pick only one disc to share with others, Zazou's Geologies would be the one. It's a masterpiece. Somehow, despite being freakin' brilliant (or maybe because of it?), Zazou has remained relatively unknown."

Chosen by Michael Borgida, director of marketing and External Affairs

Staff Picks: Power Songs for Marathons and Beyond

Inspired by the Boston Marathon, the External Affairs team shares the songs that help them dig deep, from Beyoncé to Bruce Springsteen.

Giulio De Renaldy led a team of students in creating the music for an award-winning pop-up exhibition promoting tourism in the Dominican Republic.

Can You Land a Successful Career with a Performing Arts Degree?

In an economy that rewards improvisation and entrepreneurship, well-trained artists and musicians are equipped to thrive.

The Grammy-winning Snarky Puppy bandleader spoke on crafting an authentic sound in a master class with the Berklee Snarky Puppy Ensemble.

The saxophonist for Dave Matthews Band shared practical tips on gigging, getting paid, and building relationships.

The group will perform selections from Zenón's recording career on Wednesday, March 11.

Staff Picks: Power Songs for Marathons and Beyond

Inspired by the Boston Marathon, the External Affairs team shares the songs that help them dig deep, from Beyoncé to Bruce Springsteen.

Giulio De Renaldy led a team of students in creating the music for an award-winning pop-up exhibition promoting tourism in the Dominican Republic.

Samodivi: The Haunting Beauty of the Balkans