Learn about Berklee's spring plans, including campus health and safety protocols, at berklee.edu/btb. If you have a question or concern, please email COVID19@berklee.edu.

In the Starlight Ballroom at Marriott Copley Square, there are layers of voices, as hundreds of guests gather at Berklee’s 20th annual Encore Gala.

Among them are actress Jamie Lee Curtis, the night’s emcee, and her husband, filmmaker Christopher Guest, who is a Berklee trustee. Bedecked in sleek formal attire, some attendees lean back in laughter, while others incline over their plates, listening to a story that has caught their ear. Many of these conversations center around Berklee City Music, the focus of the night's fundraiser. Launched in 1993, City Music brings the voices of underserved youth to the forefront, their innovative curriculum impacting more than 28,000 students through 47 Berklee City Music Network sites around the U.S. and Canada.

Despite the wide-ranging conversations, the evening's house band, Alissia and the Funketeers, seems to bring a groove to it all. Berklee bassist Alissia Benveniste leads the student band and each member sports varsity-style letter jackets with sleeves of Berklee red. The group creates a backbeat that corrals the dinner conversations from more than 60 tables—the crash of cymbals and the clinking of glassware—into a kind of harmony.

"City Music...teaches you how to be responsible, work hard, and be respectful all while doing what I love, which is playing music." — Rufino Henriquez, current City Music student

Jumbotron screens flank either side of the stage, scrolling through a slideshow of pictures and quotations from City Music participants. “Kids learn to…fight for and be involved in their community,” reads one parent’s quote, a visual reminder of the program's value.

"When I sing, it just feels like I can do anything..." — Lea Grace Hicks-Swinson, current City Music student

One of the voices that City Music has amplified is that of Robert Gould, a music business/management major and proud recipient of a City Music scholarship. Gould, a current Berklee student who has been involved with City Music since his junior year of high school, soon takes center stage at the Gala, singing with unflinching conviction as the Funketeers take on a mash-up of the songs “I Believe” from the film Fantasia and “Higher Ground” by Stevie Wonder. 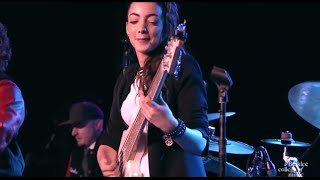 Considering that the event raised nearly $2 million, it would seem the crowd heard Gould’s message loud and clear. City Music executive director J. Curtis Warner wouldn't be surprised to see that number advance past $2 million, as funds have continued to roll in after the event. "[It] was encouraging," Warner says, "to see so many people including our Berklee colleagues step up to personally support a City Music summer scholarship."

"[City Music]...gave me confidence in myself and what I could gain from education." — William Junior, medical resident and City Music alumnus

“It was great for me to be in that environment,” Gould says after the Gala, speaking about his performance singing for the many people that make the program so successful, from the hundreds of donors to special guests like George Clinton of Parliament-Funkadelic fame and Fred Wesley, trombonist in the original James Brown band. Gould goes on, saying, “[City Music] is providing a voice for so many students—so many dreams who want to be heard.”

After the dinner program, two floors of the hotel become a series of themed nightclubs, pounding out diverse grooves the likes of which only Berklee could bring to a black tie affair. Toes tap to bluegrass led by Sierra Hull '11 in the common area while hundreds of others literally dance from one room to the next—from Terrance Simien and the Zydeco Experience in the World Music Club to Tower of Power singer Ray Greene ’96 in the Funketeer Club, leading a Berklee ensemble dedicated to his band’s catalog.

In the room dubbed the Singer-Songwriter Club, Berklee senior Callie Huber dedicates a song about Boston to all the friends she’s made at Berklee, singing, “[the] city may change, but our story is far from over.”

And when you step back and let it all in—from the thumping clubrooms to the endless islands of side-conversations—it’s all about stories getting started, and more voices being heard.