Berklee Musicians Join Alejandro Sanz at Rise Up as One Concert

The concert’s aim was to “build a bridge across borders and create a symbol of unity,” according to organizers. “Music is one of the most mysterious things we make as a human race …. it also allows for connections between people. That sometimes language divides us, sometimes interests divide us, but music always unites us, music always brings us together,” says Hamilton creator and star Lin-Manuel Miranda, one of the events cochairs—along with Grammy-winner Quincy Jones ‘51, Berklee trustees Gloria and Emilio Estefan, and 24 others—of the October 15 event.

Berklee students and alumni performed two songs with Grammy-winner Alejandro Sanz ‘13H, including a piece with Sanz and Jesse & Joy, before a live audience of 20,000 people. For some alumni, the show was the second time they performed with Sanz, the first being at the 2013 Latin Grammy Awards (Berklee alumni Freddy “Fuego” Gonzalez ’09 ‘15G and Victor Mirallas ‘15 have also been touring the world with Sanz as members of his touring band).

Berklee alumnus Nacho González ‘16 and faculty member Javier Limón worked with Univision to come up with the idea for the concert, which Limón's wife, Eva Alcántara, coproduced with them and Univision. The show was one of the first events produced by Univision's U-Lab, a startup that helps new talent build a bridge to the professional world.

One of the event's main messages was to highlight the importance of diversity and connection. “Music is a perfect example of how diversity can make a system work better. Each culture has a different approach and complexity, but in all of them you can appreciate beauty,” says González, who worked in the nonprofit world before coming to Berklee to study jazz composition. And the students and alumni are excited about their art as part of a social movement, he says. "This new generation coming up from Berklee doesn't want just to play music. They are eager to get involved in society and use their gift to strive for a better society." 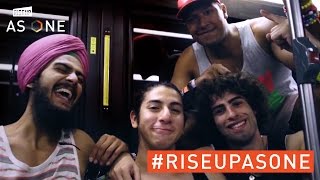 Watch the Rise Up As One official concert video

Vocalist Marianella Rojas ‘15, of Venezuela, is one of them. She has opened for Shakira and for the band Train, and has performed with Sanz at the Latin Grammys, but calls being part of this event “a blessing," not only because of who she shared the stage with, but due to "the important message we are promoting."

One of her bandmates, trumpeter Neal Rosenthal '15, puts it this way: "Through music, I have built relationships and worked with people from all over the globe, all with drastically different cultures and backgrounds. It's slightly cliché, but music really is a universal language that everyone can speak, feel, and participate in."

Limón says he believes that the college, with its multinational student body, “is the perfect example where borders disappear and people from all over the world connect through the music and forget about frontiers.”

The concert was broadcast live in Spanish on Univision and in English on FUSION.

Watch the concert in its entirety, with the students' performance starting at the 37:50 mark: